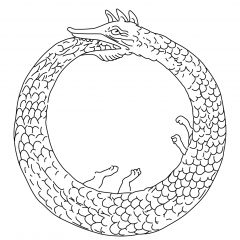 Earlier this morning, I was checking Facebook from my phone, and saw a notification of someone Liking one of my entries. I clicked through to see what it was, and it was a link to a post here on this blog. Facebook didn’t have an excerpt, just a link, so I followed the link to my blog to see what it was. It turned out to just contain another link, which was a shortened URL, so I clicked through to see where it led. It turned out that it linked to another entry here on my blog. And that entry contained another link. Which led to another entry on my blog, again, with a link. A couple more levels deep, I eventually got to an entry that was an automated cross-post to my blog, generated by a checkin on Foursquare.

About the time I was realizing what was happening, I got a notification from my phone that someone had mentioned me on Twitter. I switched over to TweetBot, and saw this:

someone nearby there, please drive to @dougal 's home and shoot his computer. if that doesn't stop it – proceed to his hosting provider…

And there were other tweets, mentioning that I was spamming links, and people were starting to wonder if my server had been hacked. But I was already pretty certain I knew what was going on. I just didn’t know why it started happening at this particular time (and I still don’t, really).

@dougal Your importer (?) is making lots of Tweets like this.

@dougal what's with all the links?

@dougal I sense some recursive auto posting going on here… 😉

So, here’s the rundown:

The mystery is why this suddenly started happening. Because I’ve had those services set up that way for some time now. My immediate solution was to disassociate the automatic cross-posting of new blog entries to other services from the JetPack Publicize feature. But what I may end up doing instead is to disable the monitoring of links on Twitter from my Delicious account, as that function was never as selective as what I really wanted.

But do you want to know who I really blame for this? It’s Twitter. Do you know why? It’s because of a change they made to their terms and conditions a while back.

You see, I used to only cross-post from Twitter to my blog via the IFTTT service, by having it watch for tweets I posted specifically with the hashtag ‘#moblog’. But changes that Twitter made to their terms caused IFTTT to remove a lot of their Twitter functionality. So, I started using the feature in Delicious which could automatically pick up links I posted to Twitter and create bookmarks from them, instead. But since there was no limiting factor (the hashtag), it opened the door for this cross-posting loop.

So there you go: it’s all Twitter’s fault.

Dougal is a web developer, and a "Developer Emeritus" for the WordPress platform. When he's not coding PHP, Perl, CSS, JavaScript, or whatnot, he spends time with his wife, three children, a dog, and a cat in their Atlanta area home.
View all posts by Dougal Campbell →
This entry was posted in Tech and tagged bookmarks, cross-posting, delicious, ifttt, loops, Services, social networks, Spam, twitter, WordPress. Bookmark the permalink.