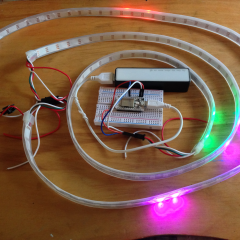 I wanted to use LEDs to make glowing “eyes”, which would peer out from the shadows around our house, as if creatures were lurking, watching the trick-or-treaters who approached. But actually wiring up and soldering a bunch LEDs, let alone making them fade in and out and blink, was going to be time consuming, and I don’t really have a dedicated workspace for that right now.

But, being a programmer, I am accustomed to thinking of shortcuts which might take a lot of up-front effort in order to save time in the long run. In this case, I thought of using addressable LED strips, and programming a microcontroller to animate pairs of “eyes” along the strip. This saves me 99% of the wiring effort, and pretty much turns my laptop into my workbench for most of the work.

The first thing I did was to use my Browser LEDStrip simulator to write a JavaScript version of my blinking eyes animation. Once I had that working as I envisioned, I started converting that code to C++, so that I could compile it for my Particle Core or Photon microcontroller boards. Since it’s been many years since I last wrote C code, and I’ve never really written C++ code, this took a little trial-and-error and a lot of Googling. But eventually, I got the code running on a Core, looking pretty much exactly like I had originally imagined.

Dougal is a web developer, and a "Developer Emeritus" for the WordPress platform. When he's not coding PHP, Perl, CSS, JavaScript, or whatnot, he spends time with his wife, three children, a dog, and a cat in their Atlanta area home.
View all posts by Dougal Campbell →
This entry was posted in Personal and tagged arduino, blinkenlights, blinkyeyes, core, eyes, Halloween, neopixels, particle, photon, projects, ws2812. Bookmark the permalink.