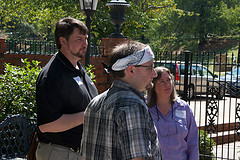 As mentioned previously, I gave a presentation last weekend at WordCamp Birmingham 2008 on “The Future of WordPress”. My section on “The Past of WordPress” ran a little longer than I had planned, but a lot of people told me that they liked that overview, so I guess it was alright. I was pretty nervous at the beginning, but a couple of minutes after I got started, I settled in a bit, and I felt like I avoided looking and sounding like a total doofus.

I was thankful to have gotten the very first presenter time slot. Once I was done with my bit, I was able to sit, relax, and listen to the other presenters. Donna Fontenot was up after me, with some good tips on SEO. I saw lots of people getting “aha” expressions and scribbling down notes during that one. I particularly enjoyed Dave Griner‘s humorous presentation, even with its “Why I chose TypePad” joke 😉 (seriously though, he doesn’t currently use WordPress, and that’s okay).

After the first round of presentations, we enjoyed a thoroughly meatatarian lunch from Full Moon BBQ, graciously provided by Microsoft. Pork BBQ sammiches FTW! The lunch break was a great opportunity to actually talk to people. I did the best I could to look for names that I recognized from Twitter and say ‘hi’ to folks I recognized. But I know there were lots of people I never really got to talk to.

After lunch, we had Jeremy Flint, Mitch Canter, and Andre Natta speaking on using WordPress as a CMS. There were lots of good tips and plugin suggestions, and plenty of questions from the audience. Next up was Dana Franks with Effective Blogging in Mass Market Media, which actually covered lots of social networking, not just blogging. Last, but not least, was Whitney Sides with Blogging for Health. Whitney shared her story of being diagnosed with cancer earlier this year, her doctor introducing her to “cancer blogs”, and her own decision to begin a blog to chronicle her ups and downs. And she ended with the awesome news that she was in remission! Yay!

There was a second day of the WordCamp, which I was unfortunately unable to attend. But I had a great time on Saturday, and I’m looking forward to next year’s event, which has already confirmed Matt Mullenweg as the keynote speaker. Now that I’ve done one presentation, I feel like I’ve caught the bug, and I’m already trying to think of other ideas I could turn into presentations. In the meantime, and until it’s outdated by the release of WordPress 2.7 later this year, you can find my “Future of WordPress” presentation below.

The Future Of WordPress Presentation
View SlideShare presentation or Upload your own. (tags: cms blogging)

Of course, this is pretty much just an outline. My original version, and the spoken presentation had additional notes about particularly important milestones, and details on certain features. If anybody at WordCamp Birmingham got any video of my presentation, let me know!

Other presentations are available on SlideShare. There are over 200 WordCamp Birmingham photos on Flickr. And you can get a pretty good sense of the event buzz from following Twitter messages tagged with #wordcampbham.

Dougal is a web developer, and a "Developer Emeritus" for the WordPress platform. When he's not coding PHP, Perl, CSS, JavaScript, or whatnot, he spends time with his wife, three children, a dog, and a cat in their Atlanta area home.
View all posts by Dougal Campbell →
This entry was posted in Blogging, Community, The South, WordPress and tagged .net, acnatta, Alabama, app, ariedana, birmingham, dazzlindonna, griner, jeremyflint, Microsoft, plugin, SEO, sidesways, SocialNetworks, studionashvegas, twitter, wordcamp, wordcampbham, WordPress. Bookmark the permalink.

4 Responses to Back from WordCamp Birmingham 2008