This post is about two weeks late, but I still wanted to share my notes about WordCamp Birmingham 2009. Short version — it was awesome!

As mentioned previously, I gave a presentation on Jumping into WordPress Plugin Development. When I arrived in Birmingham on Friday night, I still only had a little over half of my presentation notes done, and the rest was still just an outline. I stayed up all night finishing my notes and quickly putting them into a Keynote presentation (which I then exported in several other formats and saved to a USB thumbdrive for safekeeping). I got about two hours of sleep, then I headed over to Innovation Depot.

Setup was running a little behind schedule, but I put the extra time to good use by drinking lots of coffee, sampling an excellent red velvet cake muffin, and chatting with some old friends. Eventually, it was time for presentations to begin, and I was one of the presenters in the first time-slot (there were two tracks, nominally “beginner” and “advanced”, or perhaps “social/marketing” and “technical”). I was surprised to see that the room I was supposed to be using fill up past capacity, so we had to quickly relocate to a larger space (and even that room was pretty full). We finally got my laptop hooked to the projector, and I began my talk, about 20 minutes behind the planned schedule.

I won’t recap my talk here, since the slides are available, and I’ll be expanding it into a more detailed set of articles later. But I will say that I was surprised (pleasantly so) at the large turnout. There were about 180 attendees this year, and I think about 2/3 of them attended my session (the other session was a comparison of “wordpress.org” vs “wordpress.com”). I felt like I did a pretty good job presenting, despite my total lack of preparation, but I wasn’t really sure how I did until later, when several people were kind enough to compliment me. Whew, that was a relief!

After my presentation was done, the lack of sleep and the adreneline caught up with me. I wanted to attend several other sessions, but I was in a weird state of tired and keyed-up at the same time, and I was having a hard time paying attention to much. I did sit in on Jeremy Flint‘s session on Essential SEO and Analytics for WordPress, and I poked my head in on a couple of others, like Sarah Cannon‘s WordPress and Your Brand, and Mitch Canter‘s talk on WordPress Security.

Lunch was provided by Dreamland BBQ, which has been a long-time favorite barbecue joint for my family. This was also important because Matt Mullenweg was our special guest, and (being from Texas) he always has to judge the local BBQ selection. Once everyone had gotten a chance to eat, Matt began his keynote.

Actually, Matt did less of a keynote, and more of a “Town Hall” session. He talked about how the community defined WordPress, and surprised me by calling me up to the front. A few of you reading this might not know that I was on the original core development team for WordPress, back in 2003-2004. Also, if you’ve ever looked at the bottom of the “Writing Settings” page in your WordPress admin, seen the “Update Services” section, and wondered what the heck a Ping-O-Matic is, you can thank Matt and me for that. I had created the ping service for myself just for kicks, but then Matt and I branded it as the Ping-O-Matic, launched it to the public, and made it the official ping service for WordPress. Anyhow, Matt and I had worked together on WordPress and Ping-O-Matic, had communicated by email, IRC, IM, and phone for the last six years, but had never met in person until this WordCamp. But I digress.

After Matt talked about community and software freedom for a bit, he opened the floor for questions. Mostly there were questions about what’s upcoming in the next couple of WP releases — the image editor, custom post types, and the merging of WordPress-MU with the main core. After the Q&A, sessions resumed.

Later in the afternoon, we closed the day out with our other keynote speaker, Esra’a Al Shafei, AKA Mideast Youth. She spoke passionately (yet surprisingly upbeat) about how she became involved in efforts to promote political and religious tolerance in the nations of the Middle East. In particular, her efforts have largely centered around bloggers who have been jailed (and sometimes tortured and killed) for publicly disagreeing with something their governments had expressed or done. WordPress comes into the picture because it enabled her to very quickly create web sites as rallying points to bring awareness to the plight of the various people and causes she needed to champion.

After we wrapped up the first day of WordCamp, there was a speaker’s dinner (Thai food) followed by a social pub gathering. Because I was so exhausted, I only planned to stick around briefly. But after I started talking with Matt and everyone else there, I ended up staying much later than intended. Eventually, however, I dragged myself away for some much-needed sleep.

The second day of WordCamp took place at Shift Workspace, a new co-working space in Birmingham (with very good pricing, if you’re looking). Instead of speaking sessions, this was a more social day, intended more for personal networking. It was loosely broken into roundtable discussions on whatever topics people decided to talk about and a “Genius Bar”, where you could seek help on particular questions from WordPress experts.  Later, there was an impromptu demo and comparison between Flutter and Pods CMS, two WordPress plugins which offer CMS functionality similar to that provided by the CCK and Views modules in Drupal.

Lunch was next door at Rogue Tavern, which opened up exclusively for us WordCamp attendees. I had a fried zucchini and olives appetizer, salad, and mini crabcake sandwiches, all of which were delicious. Everyone else seemed to enjoy the other selections, too. Alas, I knew I was going to be driving back to Atlanta soon, so I didn’t sample any brew. I did get to chat with Matt again before I left, and I hope I’ll be able to touch base with him again in the future.

Sorry about the poor quality, but my 1st generation iPhone doesn’t take the best pictures. Here are a few shots I got with my camera, mostly from Sunday. You can find many more (and better) pictures in the WordCamp Birmingham Group on Flickr. 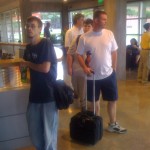 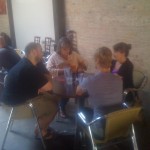 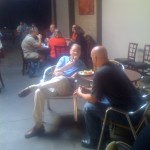 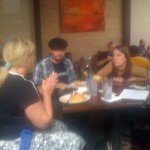 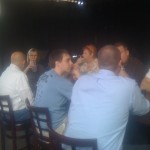 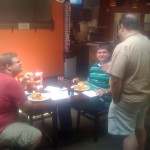 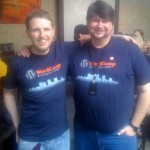 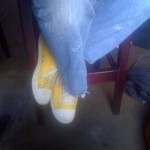 Matt’s shoes got a lot of attention

Here are some links to other recaps:

Dougal is a web developer, and a "Developer Emeritus" for the WordPress platform. When he's not coding PHP, Perl, CSS, JavaScript, or whatnot, he spends time with his wife, three children, a dog, and a cat in their Atlanta area home.
View all posts by Dougal Campbell →
This entry was posted in WordPress and tagged acnatta, Alabama, birmingham, events, helmsb, matt mullenweg, photomatt, Ping-O-Matic, pingomatic, presentation, studionashvegas, wcbhm09, wordcamp, wordcampbham, WordPress. Bookmark the permalink.

One Response to WordCamp Birmingham 2009 Recap